FREE SHIPPING ON ORDERS OVER $100

From the French countryside to Montana—and from fashion to the Western canvas—Chloé Marie Gaillard Burk blazes a trail as unique as her creations.

Until recently, self-taught artist Chloé Marie Gaillard Burk split her time between New Mexico and Montana, two states that have largely inspired her work. Born and raised in the French countryside, Gaillard Burk now lives in Montana with her American husband, and has called the United States home for the past seven years. “I’ve always known that something was awaiting me there,” she confesses. “I took the long road to find my home,” putting down stakes in Big Sky country. After all, Gaillard Burk is an artist who likes, as she puts it, “to be in the middle of very green pastures!”

Gaillard Burk is comfortable in more arid conditions, too. Her career as a visual artist really took off when she met Ashley Rolshoven—now one of her best friends—who is currently the director and co-owner of Robert L. Parsons Fine Art and Parsons Gallery of the West in trendy Taos, New Mexico. As for her professional path start, that happened in a completely different environment. “I studied fashion in Paris and London,” remembers Gaillard Burk, who spent two years in the field, working for fashion’s equivalent of a John Wayne-caliber icon—Dior. While one of the greatest experiences in her life, “I realized it wasn’t the dream I had in mind,” she says. “I believe in small and local businesses, hand-makers, [and to] show process and tradition.” 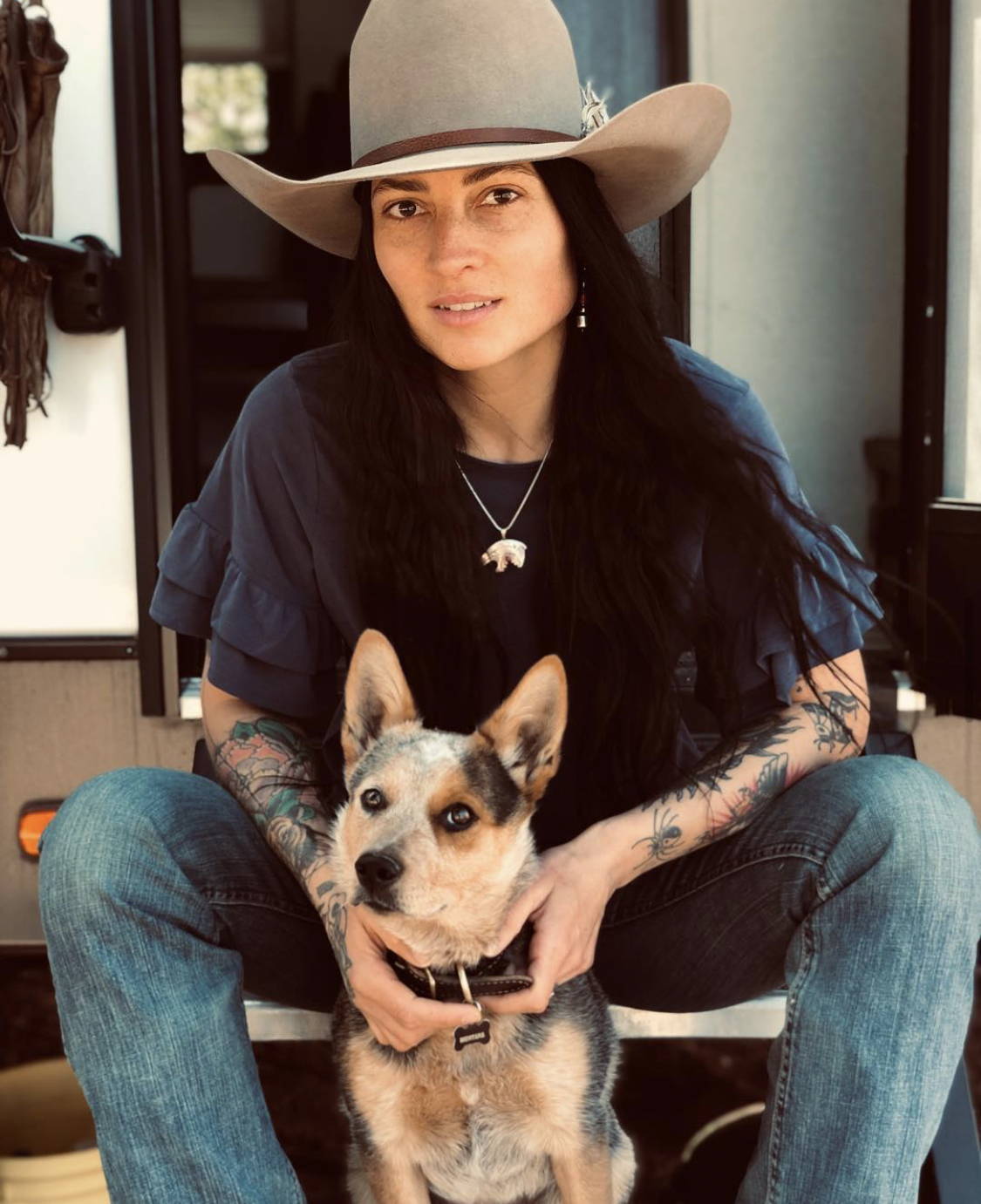 That Gaillard Burk feels at ease working with her hands in a creative field is no coincidence. It’s her stock: The daughter of a farrier father (a former jockey), she spent her childhood surrounded by nature, breeding and riding horses.

Her mother, meanwhile, is passionate about interior design and decoration. A tailor, an oil painter and pianist, an architect and a jewelry-maker—all factor in her bloodlines.

“When I was little, I used to draw a lot, and I learned how to sew and embroider,” Gaillard Burk says. “Making and crafting was an obvious activity for me.” 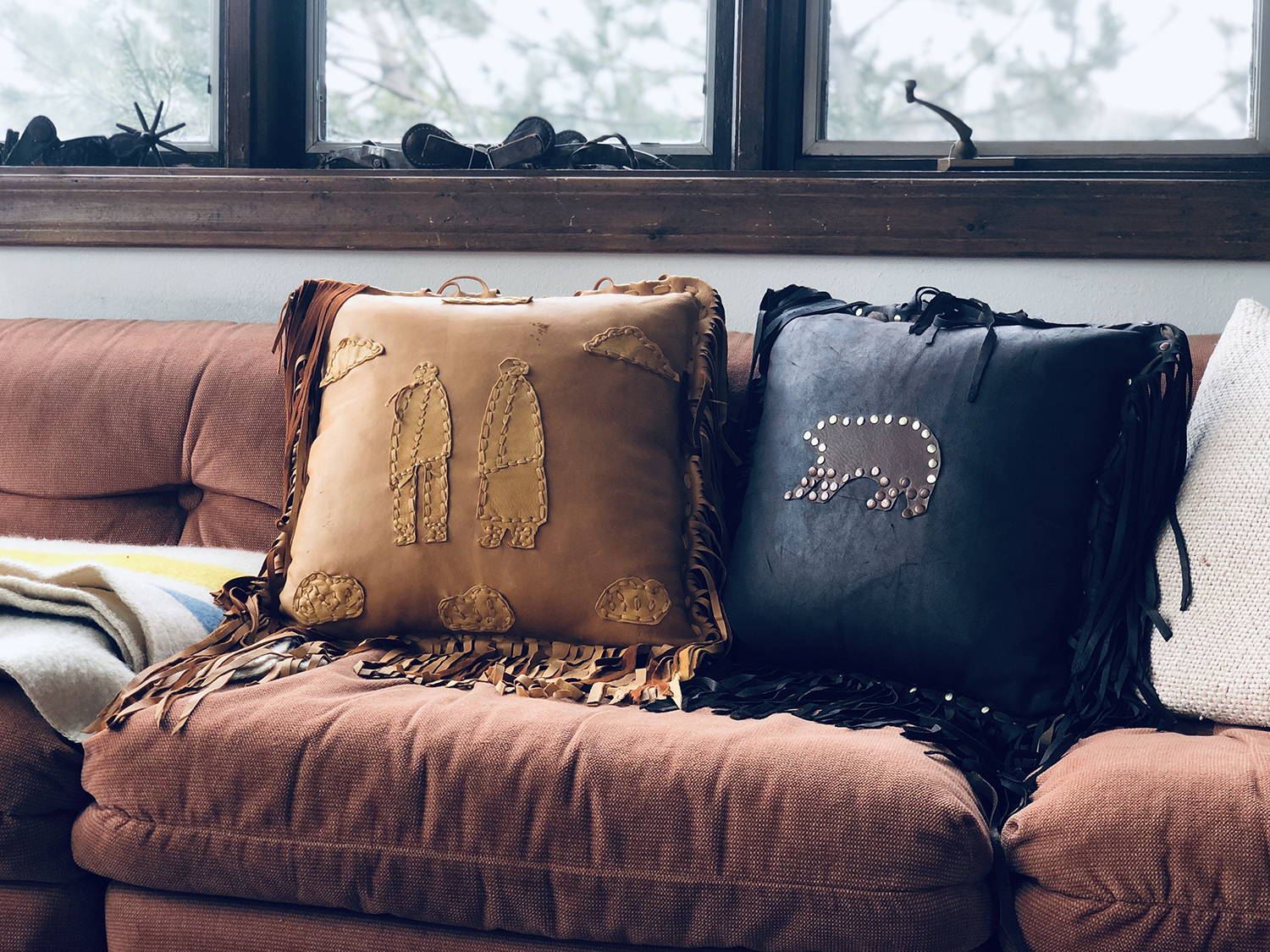 Something equally powerful attracted Gaillard Burk to the United States, and it is the very thing that John Wayne championed throughout his life: freedom “…and the idea that anything is possible,” she explains. Interested in authenticity, genuine materials that are made to last, architecture and medieval art, Gaillard Burk is fascinated by the Southwest and Native American culture.

“I deeply respect the people and I always feel honored to paint them,” she says. Working with minimum tools, the artist not only trusts her imagination but also does a lot of research in books about the old masters of the West and the history of America. So when approached by the John Wayne brand last year to collaborate on some designs, Gaillard Burk could only say yes. “I am a big fan of John Wayne and his movies,” she says. “I am touched by the character. He is a huge part of the cinematographic history of America and I believe he inspires our society and all people who love the West and the old times, including me.” 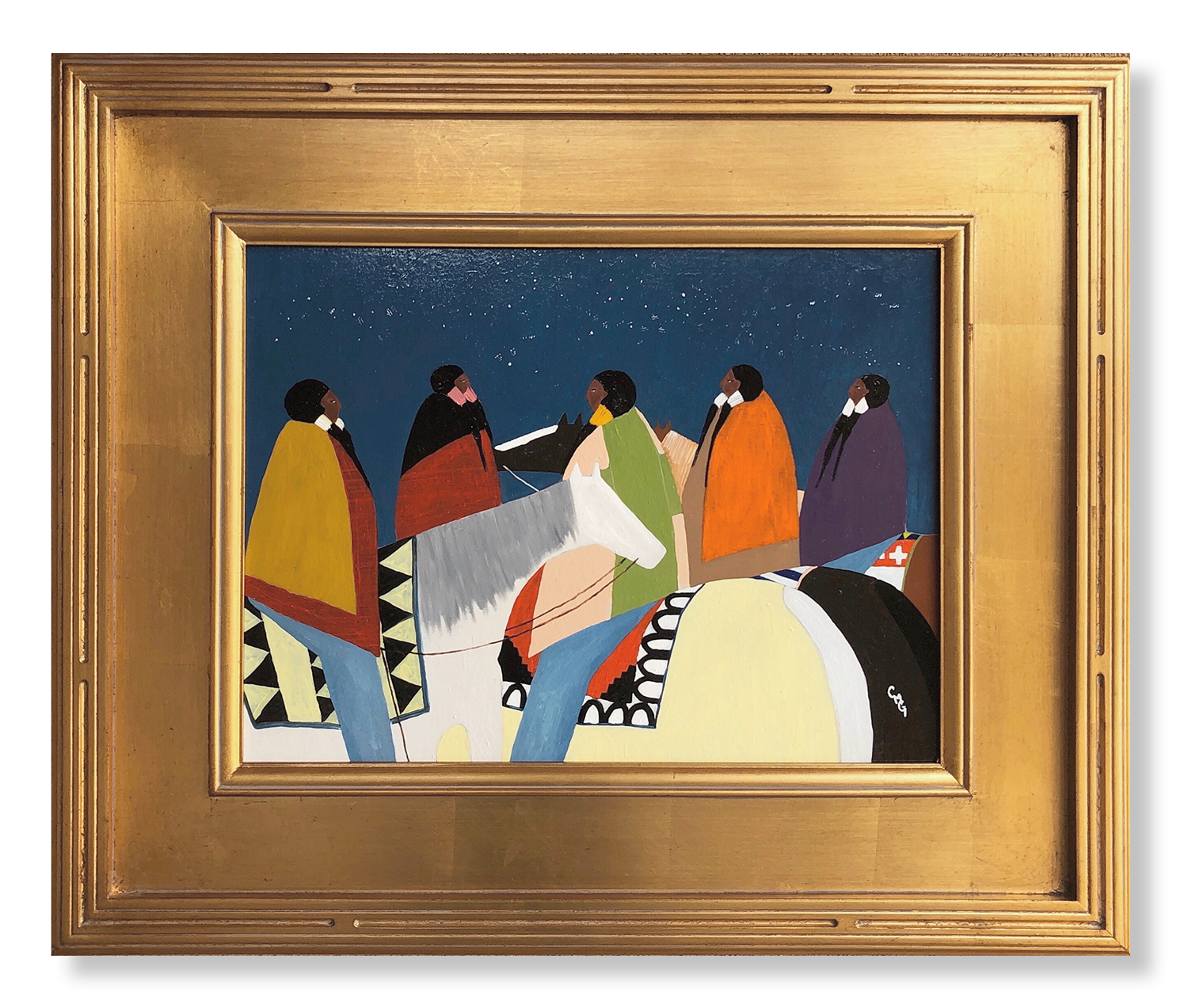 Just launched, the unique collection was inspired by the patterns Gaillard Burk uses in her paintings of the West and Southwest, such as horses and bears, among others. “I did about seven colored and pencil drawings for the brand, all meant to be on apparel and accessories, mostly t-shirts, sweatshirts, hats and scarves,” the artist says.

“The multicolored rider is John Wayne, in a folk art influence!” The color so essential to Gaillard Burk’s work is at the heart of this new project too. “I like all colors—in particular red orange/rusty and navy blue—so I tried to use many different ones, and especially color combinations.” Like John Wayne himself, every piece in this vibrant new collection reflects the spirit of the West. 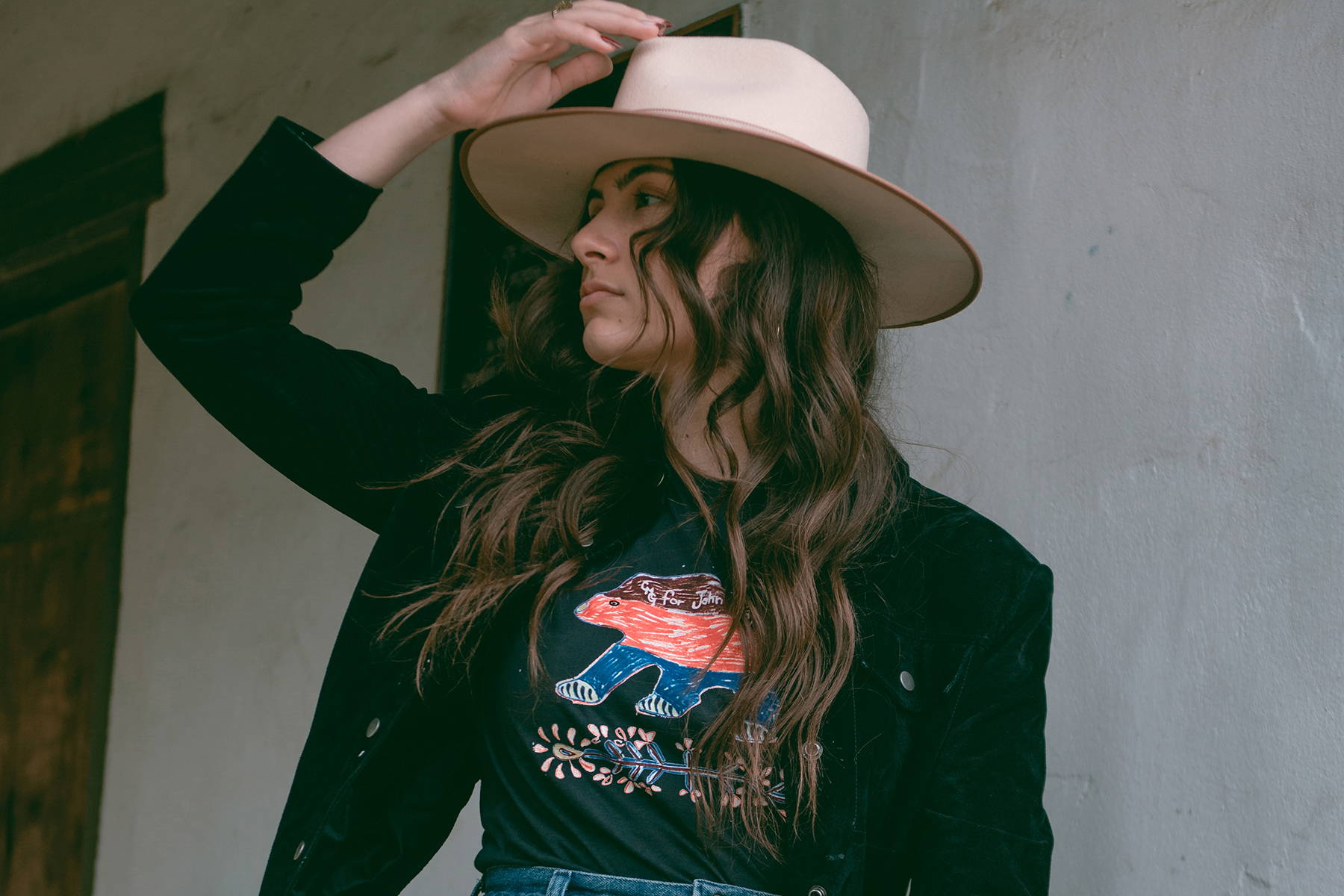 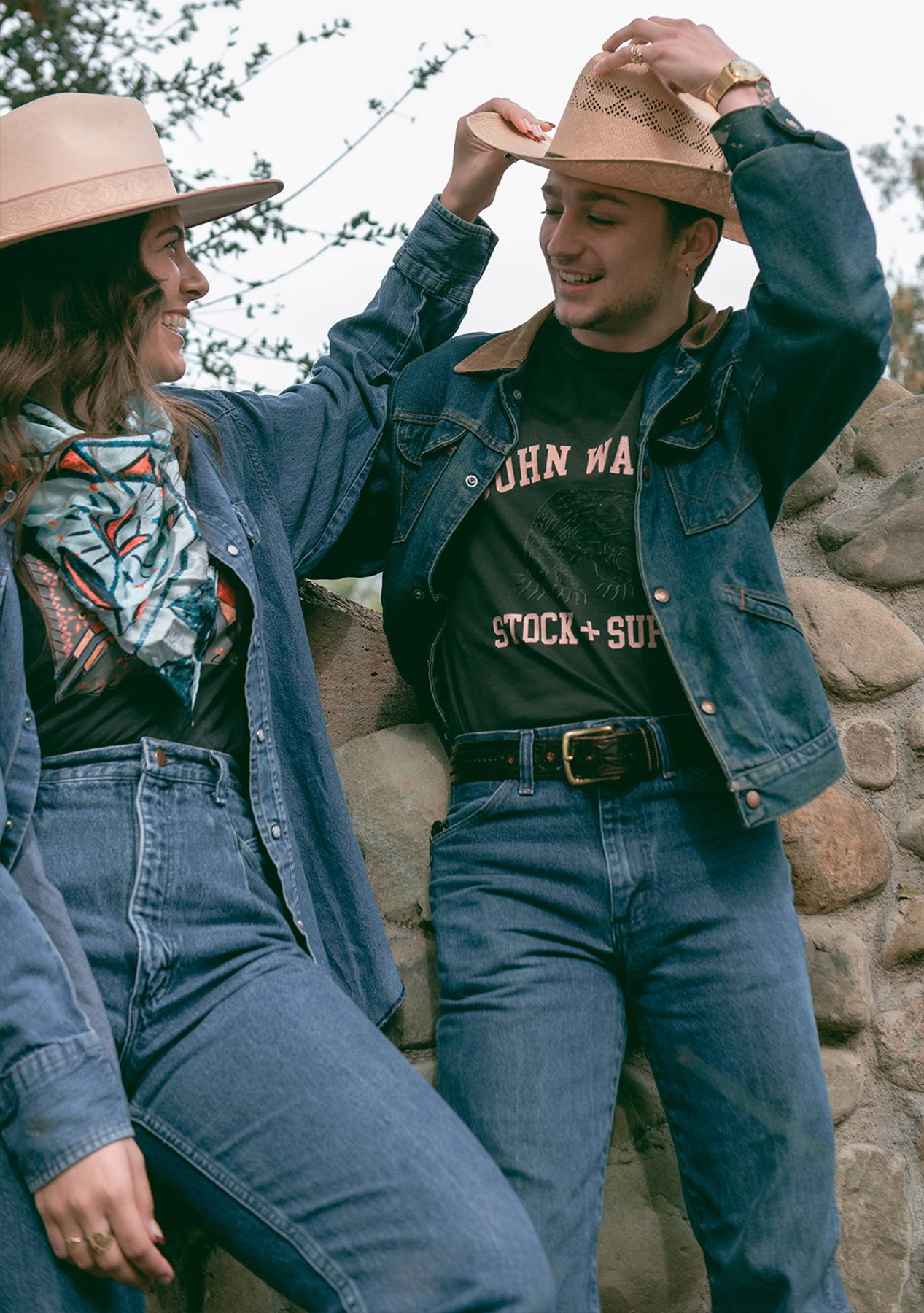 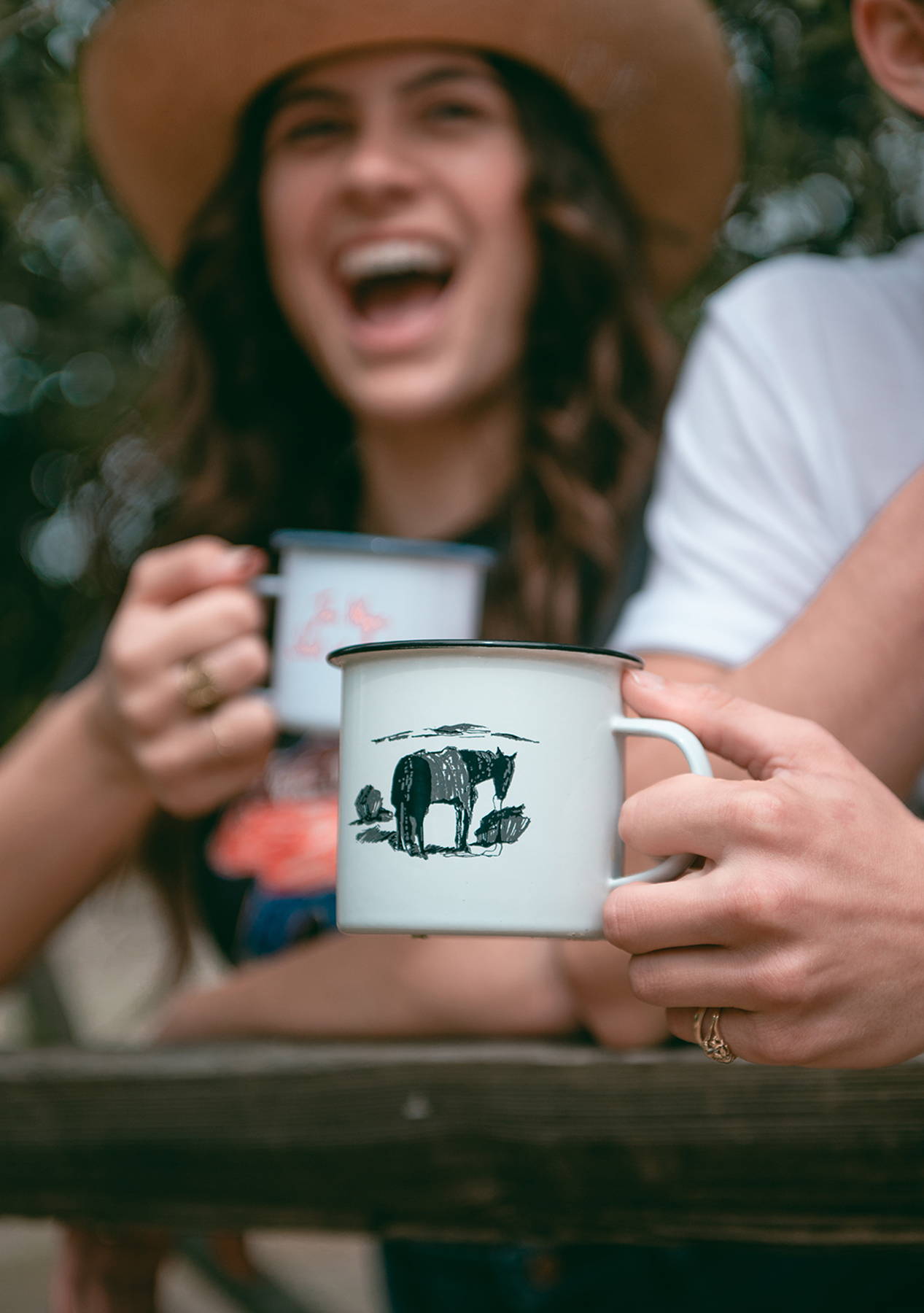 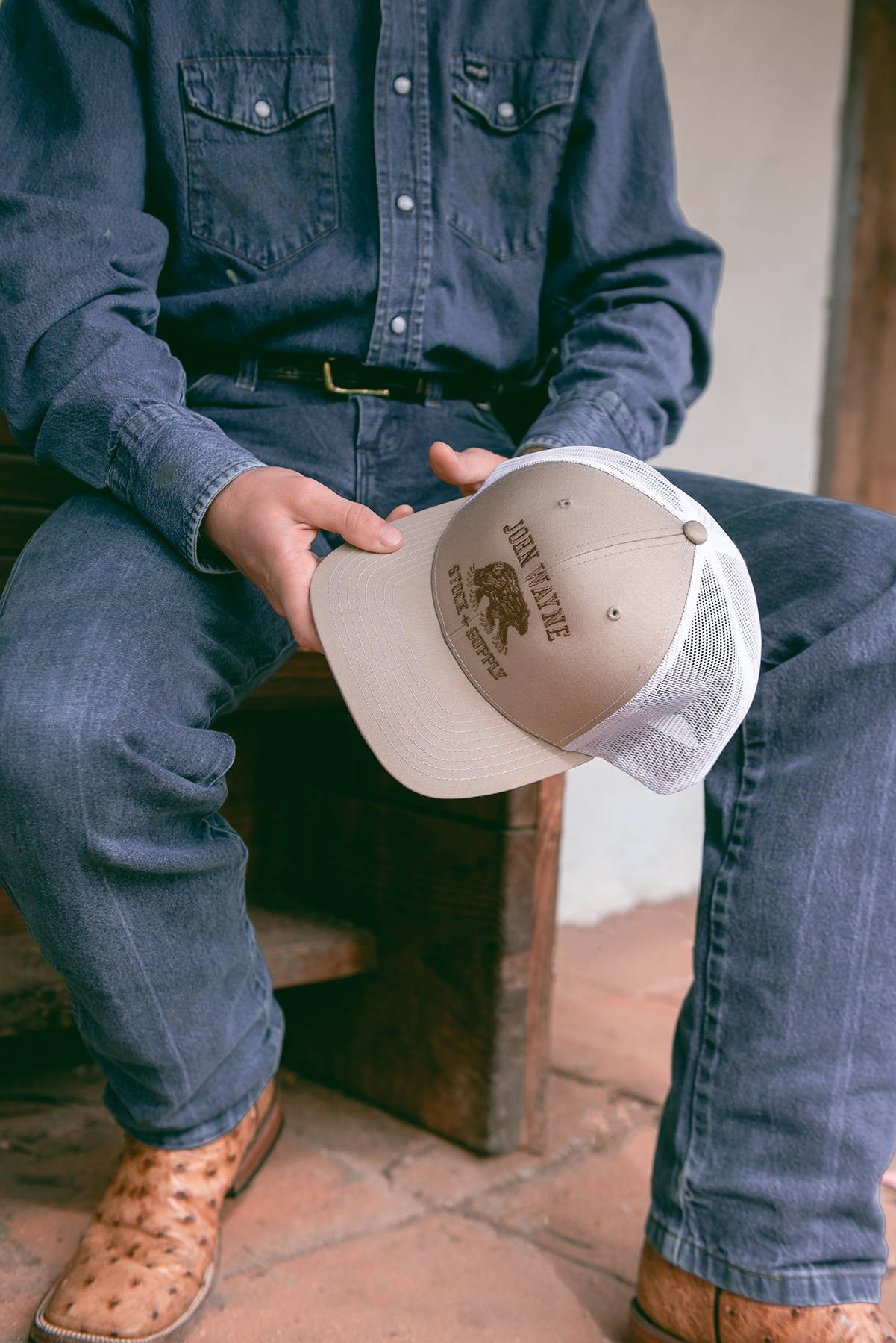 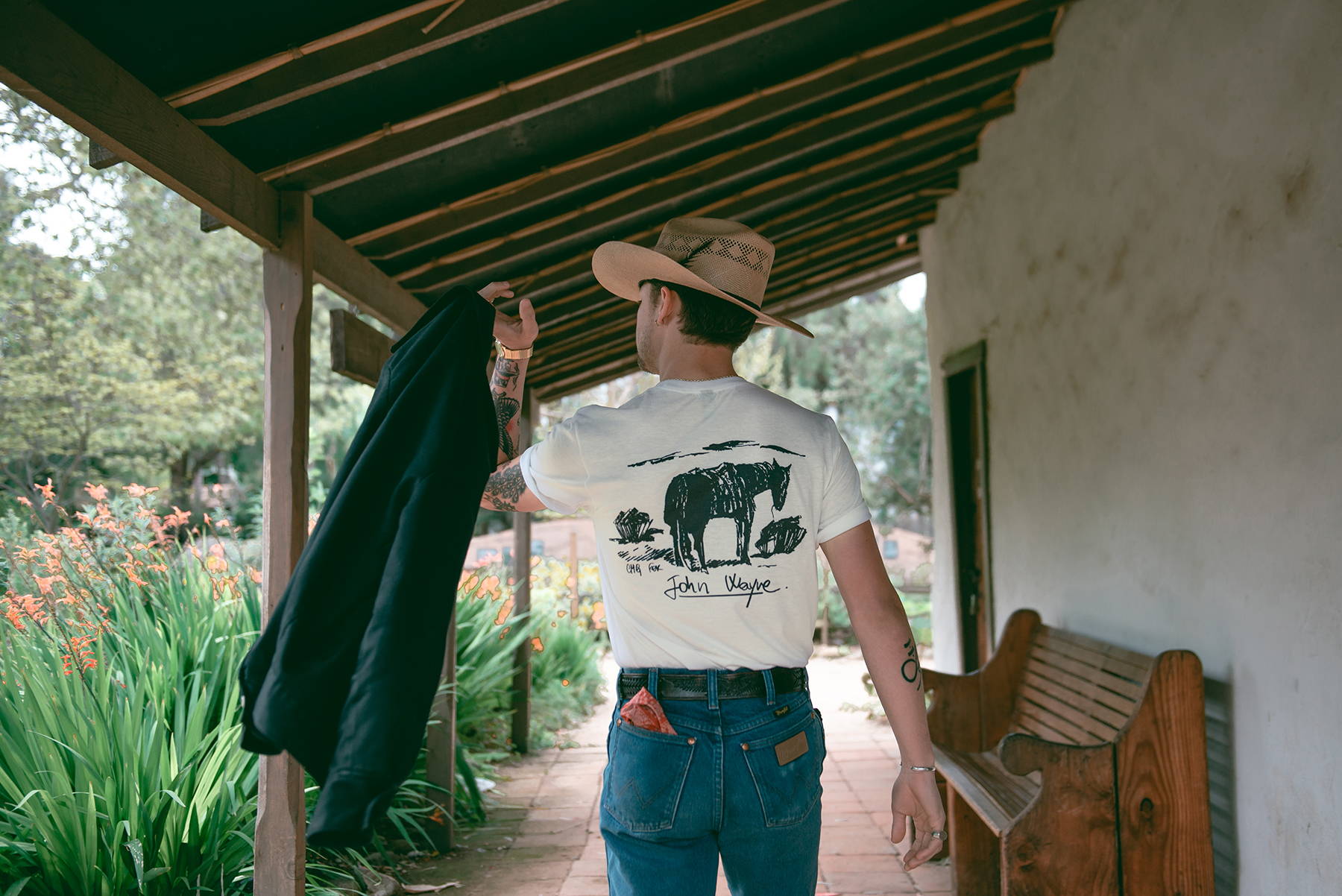